You are here: Home / Nostalgia / Where are the ants of yesteryear?

I never liked for her hibiscus. They were always full of ants.

Which brings me to my point. Where have all the ants gone? I’ve scarcely seen one all summer. 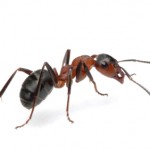 Over the years, I learned to live with ants and arranged my kitchen accordingly. You can’t kill the little buggers you just have to starve them out of your kitchen, but they would end up coming inside for the water anyway.

At one time, the supermarket shelves were stocked with a dozen varieties at least of ant exterminators – when was the last time you saw a bottle of Ant-Rid?

Has something happened to them, are they on the brink of extinction? Have they followed the sparrows?

Although I haven’t seen a single sparrow for at least five years, a decade ago flocks of them were common, a perennial presence all my life, and suddenly they’re gone. Hundreds of thousands, even millions, pffft. Sparrows are regarded in Australia as pests, although they were, and still are in places I’m sure, an inoffensive little bird, unlike the aggressive, strutting Indian myna.

It’s been said that birds can exist without man but that man will perish without birds.

But can we live without ants?

I was told to keep myself active, a suggestion I found somewhat offensive, but I heaved myself up from the couch and the BritBox and now I'm a Tour Guide. A … END_OF_DOCUMENT_TOKEN_TO_BE_REPLACED

Who is Queenie? Way back in the 20th century, in the very early 1980s, I developed a comedy character by the name of Queenie for the ABC radio and … END_OF_DOCUMENT_TOKEN_TO_BE_REPLACED