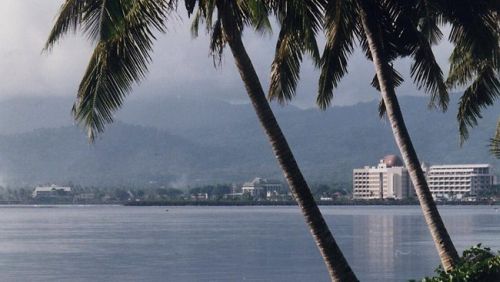 How can you lose a whole day? Easy when your government decides to change the dates.

I lose track of time occasionally, but the Samoans beat me hands down, they will lose an entire day and celebrate the new year early.

Samoa will set its date forward on 30 December because they’re sick and tired of being one day behind Australia and New Zealand, their closest neighbours and trading partners.

It’s a great device, this north-south imaginary line on the surface of the Earth, and it designates the place where each calendar day begins.

It follows the meridian of 180° longitude, roughly down the middle of the Pacific Ocean. To avoid crossing nations internally the line deviates to pass around the far east of Russia and various island groups in the Pacific.

It makes good sense for Samoa

If you look at the map with the International Dateline you can clearly see Samoa is stuck in the middle.

Being a day behind the region has meant that when it’s dawn Sunday in Samoa, it’s already dawn Monday in adjacent Tonga and nearly dawn Monday in nearby New Zealand, Australia and increasingly prominent east Asian trade partners such as China.

Samoa does a lot more business with New Zealand and Australia, China and Pacific Rim countries such as Singapore, than it does with USA and other countries on the east side of the dateline.

You’ll be pleased to know that the Samoans won’t even lose a day’s pay! The government is paying all wages which would have been earned by those working on Friday 30th.

I wonder how many of them have birthdays on this day? But no worries, they can now celebrate New Year’s Day when I do. I’ll raise my glass of bubbly and send ESP birthday greetings to anyone who missed out.

At least the Samoans understand why the date is changing. Back in 1752, England and its colonies changed calendars, making the new year start on January 1 instead of 25 March and dropping 11 days from the month of September 1752.

There’s really no better illustration of the collective idiocy of the crowd than the story of the English calendar riots of 1752.

A mob ran round throwing up their hats, and crying out “Give us back our eleven days”. 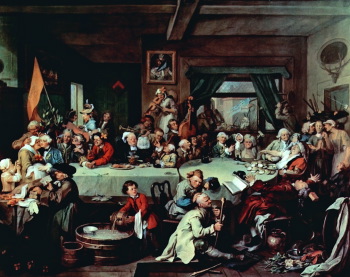 The orange banner on the left of Hogarth’s painting carries a protest against the Gregorian calendar. It reads, “Give us our eleven days.”

This is all too complicated for me to explain here, you’ll have to read the long page about the Gregorian Calendar.

Julius Caesar took control over the chaotic Roman calendar which was horribly out-of-synch with the seasons of the earth, Caesar developed a new calendar of 364 1/4 days, closely approximating the length of the tropical year (the time it takes the earth to go around the sun from the beginning of spring to the beginning of spring). His calendar was normally 365 days long but included an extra day (a leap day) every four years to account for the extra one-quarter of a day.

I need a small glass of sherry just thinking about this.

I was told to keep myself active, a suggestion I found somewhat offensive, but I heaved myself up from the couch and the BritBox and now I'm a Tour Guide. A … END_OF_DOCUMENT_TOKEN_TO_BE_REPLACED

Who is Queenie? Way back in the 20th century, in the very early 1980s, I developed a comedy character by the name of Queenie for the ABC radio and … END_OF_DOCUMENT_TOKEN_TO_BE_REPLACED