The quince has fallen out of favour these days and there are plenty of people who wouldn’t recognise a quince if it were served up on a plate in front of them. What a tragedy!
.

The quince is intensely fragrant, with a perfume like a mingling of pear blossom, rose petal and narcissus, with a sort of old-world, grandmothers-kitchen, baked-apple smell. Exquisite!

A single ripe quince placed on a table will do wonders for a room. But here are some luscious recipes for quinces, the beautiful fruit once sacred to Aphrodite, the Goddess of Love

Quinces are remarkable to look at and it’s difficult to ignore the very feminine, very voluptuous shape of their dimples, bumps and curves and their beautiful perfume. These “golden apples” were given as gifts to gods, kings and queens and you will often see images of Venus with one in her hand.

When cooked, the versatile quince is delicious. Because it’s full of pectin, it lends itself very well to the making of preserves, but can also be cooked with meat and fish and, of course, a quince dessert is a downright delight.

It’s wonderful poached in a syrup spiced with cinnamon and clove and reveals another quality of wonder – it turns a luscious shade, anywhere from deep pink to rich red. From rosy to ruby.

If fresh quinces are handled carefully and not bruised, they should last for months. Poached in a heavy syrup, they will keep very well for a month to 6 weeks in the refrigerator. 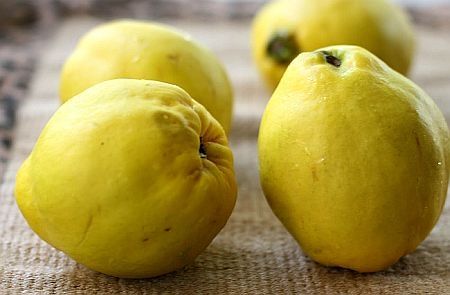 There are a number of exciting and exotic ways to cook a quince.

How to cook a quince

Cooking a quince means work and possibly explains its loss of popularity in modern times.

Their irregularity makes peeling difficult and they brown quickly unless put straight into water. You need patience. It takes even more patience to finally transform them into a deeply hued ruby red, with a soft yet firm texture that’s lightly granular and richly flavoured.

Most commercial quinces are picked too green so they never develop the rich colour and delightful perfume. I wouldn’t recommend buying quinces from a supermarket chain. A farmers’ market is a safer bet.

Keep an eye out, you may spot a quince tree in a neighbour’s yard, the fruit stays on for quite a while in autumn long after the leaves have dropped.

When cooked, the versatile quince is delicious. Because it’s full of pectin, it lends itself very well to the making of preserves, but can also be cooked with meat and fish and, of course, a quince dessert is a downright delight.

The Golden Apples of the Goddess

The quince of Aphrodite was the Fruit of Paradise in the Garden of the Hesperides, the mythical Eden sought by Hercules somewhere past Egypt.

I bet it was! A quince is a perfect fruit to grow in the garden of a goddess. There’s something essentially paradisial about a bowl of quince with vanilla ice cream. Just heavenly!

Many references in ancient texts were mis-translated to “apple”, such as the fruit in Song of Solomon.

Among the ancient Greeks, the quince was a ritual offering at weddings, for it had come from the Levant with Aphrodite and remained sacred to her. Plutarch reports that a Greek bride would nibble a quince to perfume her kiss before entering the bridal chamber, “in order that the first greeting may not be disagreeable nor unpleasant”.

It was a quince that Paris awarded Aphrodite (and resulted in the Trojan War) and it was for a golden quince that Atalanta paused in her race.

I was told to keep myself active, a suggestion I found somewhat offensive, but I heaved myself up from the couch and the BritBox and now I'm a Tour Guide. A … END_OF_DOCUMENT_TOKEN_TO_BE_REPLACED

Who is Queenie? Way back in the 20th century, in the very early 1980s, I developed a comedy character by the name of Queenie for the ABC radio and … END_OF_DOCUMENT_TOKEN_TO_BE_REPLACED