You are here: Home / Royals / Harry is more than a Hoon

Harry has a bit of a PR problem. (It’s to do with the way he behaves). But now the papers are cooing over an imminent engagement and forgetting what a nasty little piece of work he is.

The boy takes after his grandfather in many ways, and that shouldn’t be at all surprising. And his Poppa Phil is a dead shit.

Phillip is an outspoken racist and Harry is a chip off the old blockhead. In January 2009, the News of the World released videos on its website which were shot by Harry during his military service in 2006, in which he was heard referring to one of his fellow cadets as “our little Paki friend” and telling another that he looked like a “raghead.” Charming.

The year before that Harry was photographed prancing around in a Nazi uniform while clutching a cigarette and a drink. Asked to comment on the photo, he issued a statement saying he is “very sorry if I caused any offense or embarrassment to anyone… “. I’m sure it didn’t embarrass his grandfather. Not only was Prince Phillip trained in the Hitler Youth curriculum, but his German brothers-in-law, with whom he lived, were all high-ranking figures in the Nazi Party.

And the year before that a former teacher of Harry’s at Eton College claimed before a tribunal that she was unfairly dismissed from the school after being ordered to help the prince cheat on an exam and had a tape to prove it.

A Palace spokesman told the hearing that it was unfair for the teacher’s lawyers to give the court only a small portion of the tape. 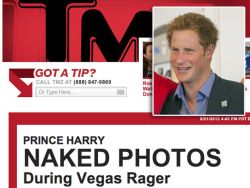 This young chap is third in line for the throne. Keep that in your mind.

The now-famous nude photos are no big deal, at least not to me, it shows he’s a common-or-garden drunken hoon.

The Royals were upset though. They were more upset when the Sun chose to ignore their request to avoid publishing any photos that depicted the prince in a compromising position. The New York Post gave us some more details: An anonymous “eyewitness” said that the nude-frolic party involved a bit more than alcohol, that certain attendees were “snorting cocaine” and “rolling on shrooms”.

I’m a little bored by this story, and I’m sure you are too.

Does anyone really care?

I was told to keep myself active, a suggestion I found somewhat offensive, but I heaved myself up from the couch and the BritBox and now I'm a Tour Guide. A … END_OF_DOCUMENT_TOKEN_TO_BE_REPLACED

Who is Queenie? Way back in the 20th century, in the very early 1980s, I developed a comedy character by the name of Queenie for the ABC radio and … END_OF_DOCUMENT_TOKEN_TO_BE_REPLACED