You are here: Home / Nostalgia / Free Milk for Schools

Yesterday I touched on a subject which remains vividly in the memory of many readers. The Free Milk for Schools scheme. I’m not the only one who suffers recurring nightmares of forgetting to shake the bottle before opening and copping a mouthful of warm, lumpy cream.

Even when the magpies had already pierced the top of the lid, you still ran into trouble to get at the blasted stuff.

The insertion of the straw (thoughtfully provided) into the bottle was the biggest challenge. The bottle was almost impossible to open by normal means, which was downward pressure under the palm of the hand followed by a twisting motion. It would only open by the ‘thumb through the lid’ strategy.

Use of the thumb had to be discreet given that it was forbidden. The secret wasn’t always well kept, particularly when that big spurt of curds landed smack bang on your school dress.

I still wake in fright from a recurring dream of Miss Callanan policing the crates in our school playground making sure no child escaped without a bottle.

It was a defining childhood experience that taught me the absolute necessity of being able to lie convincingly. I learned to say brazenly, That’s mine Miss!” and point to any old empty bottle in the crate.

The Federal introduction of Free Milk was greeted with mixed reactions. No one asked the children. 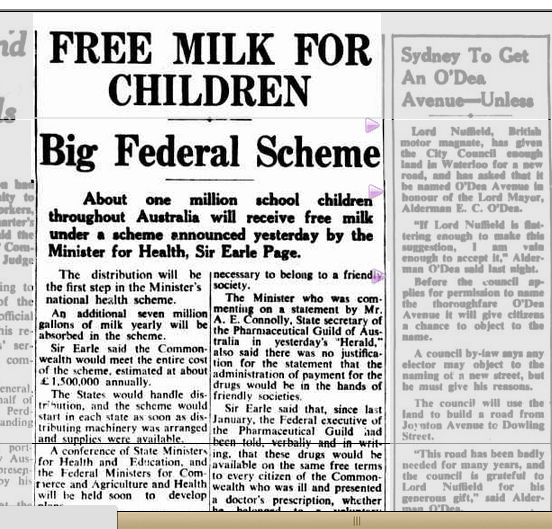 Thc secretary of the Milk Zone Dairymen’s Council, Mr. L. C. Turton, said it was difficult to understand thc timing of the free milk scheme in a season of lowest production. This increased demand for milk would provide problems for the Milk Board and its suppliers. Production would have to be increased by some means, said Mr. Turton, especially in the winter months.

Do cows only produce milk in Summer? I didn’t know this but possibly cows were very different in 1950.

It’s all the fault of migrants of course, they’re greedy and taking all of our milk.

Normal liquid milk requirements in Sydney were now more than 25,000 gallons a week greater than at this time last year. In addition, if the demand for sweet cream was to be met, another 150,000 gallons a week would be necessary. The population was steadily increasing, and the majority of New Australians were heavy milk consumers.

And of course those lazy Australian workers! Wouldn’t work in an iron lung. Mr. L.C Turton went on to complain ..

Yet the dairying industry was still declining, mainly because the life was very hard and it was much easier to make a living in industrial work, with its 40-hour week and general amenities.

No one wants to work down on the farm and this will cause great hardship for the English. We’re reminded of our debt to the Mother Country 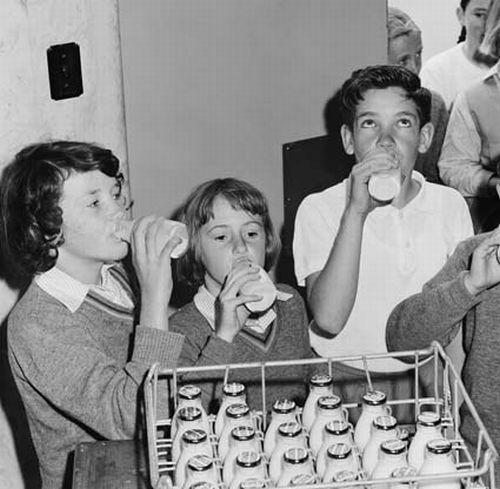 I have friends who never recovered from the Free Milk Scheme. To this day, they feel faint when passing the milk shelves in the supermarket and the sight of a blob of cream on a coffee cup sets them to gagging and gasping. This is most probably a good thing.

I was told to keep myself active, a suggestion I found somewhat offensive, but I heaved myself up from the couch and the BritBox and now I'm a Tour Guide. A … END_OF_DOCUMENT_TOKEN_TO_BE_REPLACED

Who is Queenie? Way back in the 20th century, in the very early 1980s, I developed a comedy character by the name of Queenie for the ABC radio and … END_OF_DOCUMENT_TOKEN_TO_BE_REPLACED