You are here: Home / Nostalgia / Fat and Wealthy Monk Found 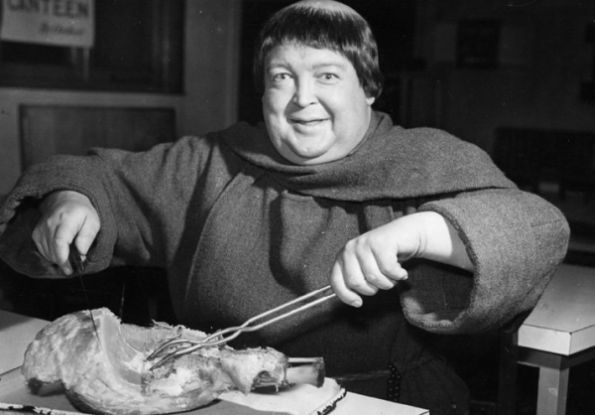 This happy snap is of Alexander Gauge who played Friar Tuck in the 1950s English television series, The Adventures of Robin Hood. (I can still sing the theme song).

Fond as I am of the fat friar who ate a tad too much, it’s not Friar Tuck I want to talk about, but the skeleton of a Cistercian abbot found at the ruins of Furness Abbey, one of Britain’s most influential medieval monasteries.

Thanks to the miracles of modern technology we know a lot about this abbot.

He was a portly man with arthritis, roughly 5’7 in height, and aged somewhere between 40 and 50. He had a bony growth going down his vertebrae, a condition called DISH, which is associated with obesity and middle-aged onset type-2 diabetes. Sounds like he was having a fairly rich diet.

His knees were also worn, praying too much I expect. I’m plagued by arthritis myself but I can assure you it’s not from praying. 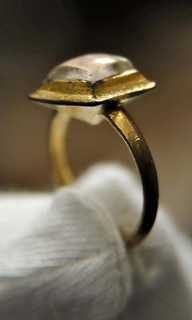 The abbot was buried with a very rare medieval gilded crosier, the mark of his office, and a jewelled ring.

The ring – quite large, made for a man with fat fingers – is likely to have been given to the abbot on his consecration.

It’s an unusual ring, the bezel is a pyramid shape and is pointed. Perhaps it held a relic in place on the abbot’s finger?

Nationally he was an important man, a leader of the Cistercian order which was the most powerful monastic order in England. When Henry VIII gave all the monasteries the boot in 1537, Furness was the second richest in England.

Luckily for this abbot, he died sometime in the 12th century and missed the indignities of the Dissolution.

The red sandstone ruins of Furness Abbey lie brooding in Cumbria. I’ve seen sketches by Turner, and Wordsworth was so charmed by the song of a single wren that he professed, “I could have made my dwelling-place and lived for ever there.” It’s been a while since then, William, and I don’t know if there are even any wrens left in Britain. 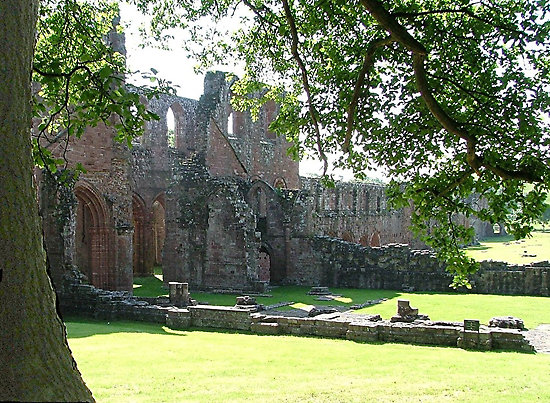 Looks enchanting doesn’t it, it would have looked amazing when our abbot was up and about.

There’s a nice little video here of the 12th century abbot. I love Science, don’t you?

I was told to keep myself active, a suggestion I found somewhat offensive, but I heaved myself up from the couch and the BritBox and now I'm a Tour Guide. A … END_OF_DOCUMENT_TOKEN_TO_BE_REPLACED

Who is Queenie? Way back in the 20th century, in the very early 1980s, I developed a comedy character by the name of Queenie for the ABC radio and … END_OF_DOCUMENT_TOKEN_TO_BE_REPLACED