You are here: Home / How to Cook Things / Fasolakia
Jump to Recipe - Print Recipe

The rain held off for the Greek Festival in Melbourne today. That was a plus. No wild young men dancing though which is, after all, the main reason I like the Festival in the first place, a nice little Cretan war dance never goes astray.

However, I caught a cooking demonstration from Spiri Tsintziras and was inspired to start making fasolakia as soon as I got home. 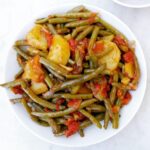 I was told to keep myself active, a suggestion I found somewhat offensive, but I heaved myself up from the couch and the BritBox and now I'm a Tour Guide. A … END_OF_DOCUMENT_TOKEN_TO_BE_REPLACED

Who is Queenie? Way back in the 20th century, in the very early 1980s, I developed a comedy character by the name of Queenie for the ABC radio and … END_OF_DOCUMENT_TOKEN_TO_BE_REPLACED