You are here: Home / Posts from the Dark Ages / Extreme Bovine Bravado 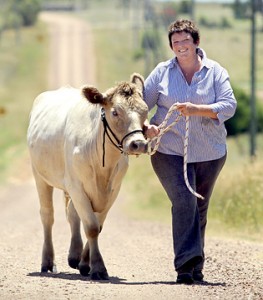 It’s just as well that Thorpie is returning to the pool for sprint events only, because Australian distance swimming has a bright new star . . . Danette the wonder cow.

Danette, a Murray Grey, survived an epic 95km swim during the January floods.

After being swept away by the torrent that raged through a small property near Lowood in the Brisbane Valley, Danette was found three days later bobbing at the mouth of the Brisbane River near Luggage Point.

For awed youngsters in the Brisbane Valley, fairytales such as The Cow That Jumped Over the Moon have been replaced by the real-life drama of The Cow That Swam Through The Monsoon.

Brisbane council workers used the tag inside Danette’s ear to identify her, but were still in a state of confusion about how she got there when they rang her owner.

Danette is a show cow who last year won a third prize at the Brisbane Exhibition; locals quip she is so tough that this year she may enter the wood chop.

I was told to keep myself active, a suggestion I found somewhat offensive, but I heaved myself up from the couch and the BritBox and now I'm a Tour Guide. A … END_OF_DOCUMENT_TOKEN_TO_BE_REPLACED

Who is Queenie? Way back in the 20th century, in the very early 1980s, I developed a comedy character by the name of Queenie for the ABC radio and … END_OF_DOCUMENT_TOKEN_TO_BE_REPLACED