Way back in the 20th century, in the very early 1980s, I developed a comedy character by the name of Queenie for the ABC radio and 3CR. She was a down to earth lady with a rich local history, irascible opinions on weak-kneed politicians and she liked a small sherry in the afternoon. Where better than Collingwood? I knew the area and I knew a lot of old women just like Queenie.

As time went on, the character aged and I don’t think she would even be alive today. Fortunately for her! Her anger would, as they say, know no bounds. But it’s a curious thing, every year I’ve been growing more and more like Queenie and sometimes I feel that I’ve morphed into her and literally become – Queenie of Collingwood. She has taken over me and she’s not a comedy character anymore.

The following introduction is from Queenie herself.

G’day, I’m Queenie, named after my grandmother, the original Queenie of Collingwood. And her grandmother was the first girl to be born in Collingwood. They wouldn’t recognise the place now.

Collingwood is an inner urban area rapidly filling up with the nouveaux riches, arrogant incomers who don’t have much time for age pensioners or, indeed, for anyone except themselves.  I grew up around here and I miss the sense of neighbourhood, I miss the friendly ‘good mornings’ of the past and I miss the corner shops.

I’ve been called an ageing hippie, but really, I was a beatnik, gripped with angst. Don’t mention the War.

I don’t like modern disregard for basic manners, I don’t like the modern obsession with reality television, and I especially don’t like the contemptible bastards in Canberra. I’d like to get a few of them up a back lane in Collingwood and show them what we think of malicious lying smirking cowards around here. The old Collingwood Crooks were at least honest.

My hips ache and my back creaks but my passion for social justice still burns bright. If anything, it’s sharper, honed by the crushing realisation that the world is getting worse. Corrupt politicians don’t care that we know they’re corrupt. I can’t go on  about the bastards, my doctor has warned me about getting angry. 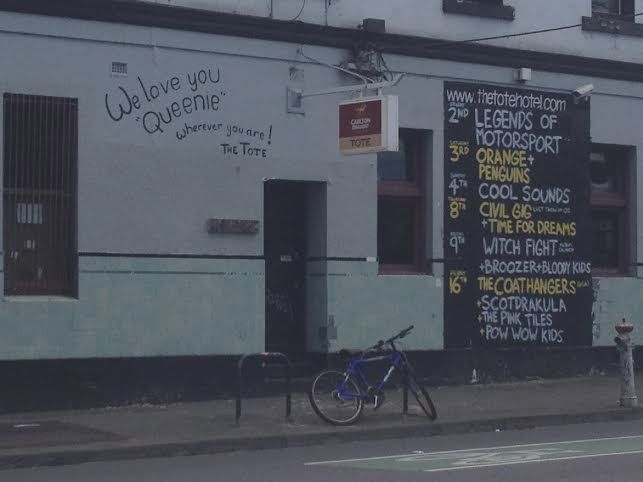 Also, I like to cook.
Drop in for a cuppa and a scone if you’re passing!

I was told to keep myself active, a suggestion I found somewhat offensive, but I heaved myself up from the couch and the BritBox and now I'm a Tour Guide. A … END_OF_DOCUMENT_TOKEN_TO_BE_REPLACED

Who is Queenie? Way back in the 20th century, in the very early 1980s, I developed a comedy character by the name of Queenie for the ABC radio and … END_OF_DOCUMENT_TOKEN_TO_BE_REPLACED