You are here: Home / Nostalgia / Beer brings you back from the dead 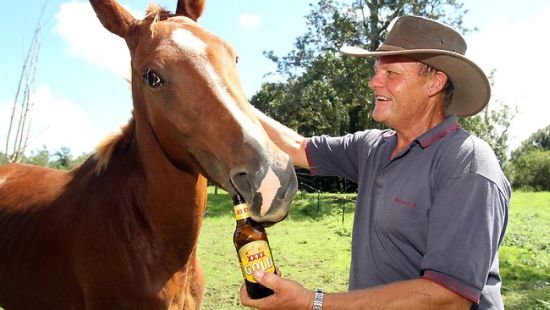 Personally I can go without XXXX beer for an indefinite amount of time, like twenty years, but I may revise my opinion.

A couple of stubbies of the Queensland beer brought a horse back from the dead which, you must admit, seems to denote a valuable quality in the mix. Any brew which can give you a kick-start when you’re hovering at death’s door is worthwhile having in your medicine cabinet. Or in your fridge, whatever floats your boat.

Diamond Mojo, struck down with potentially deadly colic, had been given the last rites by his owner Steve Clibborn.

I had pretty much kissed him goodbye

said Steve, and as a last resort he turned to the grog.

it was worth a shot and as soon as he had that beer, he burped and perked right up. So I gave him another couple.

Some mornings I could do with a miracle to get out of bed in one piece. I may just pick up a couple of bottles of XXXX and give them a nudge. I’ll let you know how it goes.

I was told to keep myself active, a suggestion I found somewhat offensive, but I heaved myself up from the couch and the BritBox and now I'm a Tour Guide. A … END_OF_DOCUMENT_TOKEN_TO_BE_REPLACED

Who is Queenie? Way back in the 20th century, in the very early 1980s, I developed a comedy character by the name of Queenie for the ABC radio and … END_OF_DOCUMENT_TOKEN_TO_BE_REPLACED